Dr. Fei Gao, the co-director of ZJU Field Autonomous System and Computing Laboratory (ZJU FAST Lab), received Honorable Mention in the 2020 IEEE Transactions on Robotics King-Sun Fu Memorial Best Paper Award for the paper “Teach-Repeat-Replan: A Complete and Robust System for Aggressive Flight in Complex Environments” as the first and corresponding author. This is the first time that a college or university of mainland China has won this honor as the first completion unit, and it is also the first time that IEEE-TRO has awarded this honor to a paper published in the field of unmanned aerial vehicles on IEEE-TRO. This paper presents a complete solution towards robust aerial autonomy, enabling a drone to accomplish a complicated task with professional performance under merely rough human operations. The human operator may provide an arbitrarily slow or jerky trajectory with an expected topological structure. The system then autonomously converts this poor teaching trajectory to a topologically equivalent and local optimal one. The aggressiveness of the generated repeating motions is tunable, which can meet speed requirements ranging from drone racing to aerial filming. Moreover, during the repeating flight, the system locally observes environmental changes and replans safe trajectories to avoid moving obstacles. The proposed system extends the classical robotics teach-and-repeat framework and is named as Teach-Repeat-Replan. By the time the news was released, this work had ranked among the top 50 popular articles in the IEEE-TRO database (ranked 14th) and received extensive attention and high praise from well-known scholars in the field […] 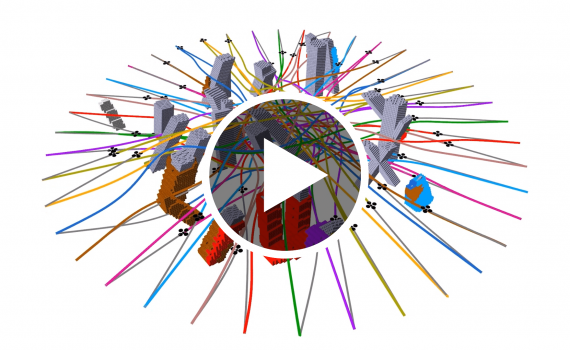